The Coastal Resources Center (CRC), through its USAID-supported Sustainable Fisheries Management Project in Ghana, joined many around the globe to commemorate World Fisheries Day 2016, centered on the theme “empowering fishing communities.” The event culminated with fishing communities signing a pledge to promote and commit to responsible fishing practices, in Cape Coast; close to the Castle visited by President Obama several years ago. World Fisheries Day is celebrated every year on November 21. The celebration in Ghana however took place on Tuesday November 22; because Tuesdays are traditional fishing holidays for artisanal fishers in Ghana. The event was organized by the major fishermen and fish processors associations in Ghana and is by the fisher folk and for the fisher folk to express their concerns about declining fish stocks in Ghana’s marine waters and their commitments to support sustainable and responsible fishing practices to rebuild Ghana’s marine fisheries; the marine sector makes up approximately 80% of the country’s domestic landings, employs over 140,000 people and provides 60% of the animal protein in local diet. For more information, click here 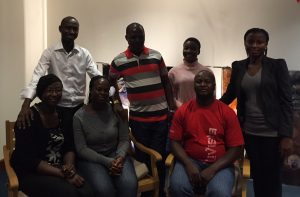 The University of Rhode Island Coastal Resources Center (URI CRC) is proudly hosting seven graduate students from Africa, with affiliations at several colleges, who are, with CRC guidance, pursuing URI master’s and doctoral degrees in varied fields to ultimately help build the capacity of their own communities to engage in innovative coastal management planning and practice. CRC is engaged in extensive coastal management and fisheries related projects in the countries of Ghana and Malawi; bolstering the professional development of emerging leaders and in-country practitioners is a critical aspect of the work — a focus emphasized by URI President David M. Dooley at his recent meeting with University of Cape Coast/Ghana (UCC) leadership to initiate a learning exchange between the schools. Funding for the graduate student effort is provided by the U.S. Agency for International Development (USAID). While one student, Evans Arizi of Ghana, is already well underway with his URI study program, six more are embarking this semester. From Ghana: Rosina Cobbina, Ivy Gyimah, Vida Osei and Evelyn Takyi. From Malawi: Innocent Gumulira and Elliot Lungu. Please join CRC in extending a warm welcome to this student group.

August 12, 2016 – The United States Ambassador to Ghana, Robert P Jackson on Friday, appealed to fisher folk in Elmina, an important fishing port in the Central Region, to maintain children in their home environment with their families and offer them good education instead of trafficking them into child labor-related activities that affect their health and ability to develop properly in life. Ambassador Jackson made the call when he visited the fishing community, which is a focal site of the USAID-funded Sustainable Fisheries Management Project (SFMP), implemented by the Coastal Resources Center (CRC) at the Graduate School of Oceanography, University of Rhode Island. Read the full story

The public is invited to participate in a community workshop on flood protection for historic and culturally valuable properties on Newport’s coast. The workshop is scheduled for THURSDAY, JULY 14, 2016, 3-7 P.M., at Emmanuel Church, 42 Dearborn St., Newport, RI 02840.

NOTE: The public is welcome for the whole event; a general overview of the project will be given at 5 p.m. to ensure attendees arriving later in the day have ample opportunity to gain information. RSVP if attending by July 11 to ensure adequate refreshments.

The workshop follows the April 2016 Keeping History Above Water Conference in Newport, which explored historic preservation efforts regarding flooding from sea level rise a key impact of climate change. Newport hosts a broad array of historical and cultural assets, including registered historic buildings, and rising water and increased storminess is expected to threaten these over time. The University of Rhode Island (URI) Coastal Resources Center (CRC) and Rhode Island Sea Grant are facilitating the meeting for several community groups interested in continuing the conference dialogue. The event is also possible due to generous support from the Prince Charitable Trusts.

Science indicates that Rhode Island is more likely than many other coastal states to experience flooding over time from sea level rise, said Dawn Kotowicz, a coastal manager for CRC and extension agent for Rhode Island Sea Grant. Coastal development, including the historic properties and cultural assets that Newport values, is at risk, so collaborating on practical solutions is critical.

CRC and Rhode Island Sea Grant, at the URI Graduate School of Oceanography, provide Rhode Island and beyond with a variety of community-based coastal management and outreach services and programs.

Great climate change article featuring our own Pam Rubinoff and the work that she and Teresa Crean are doing in Warwick’s Oakland Beach! Excerpted from Forty-One Degrees North Magazine, a publication of Rhode Island Sea Grant & The Coastal Institute at the University of Rhode Island. Written by Jerry O’Brien, Photographs by Michael Cevoli.

URI President Dooley blogs about his visit to CRC project sites in Ghana.

An important outcome of the projects is the development of partnerships in Ghana and the West Africa region involving government agencies, universities, and NGOs. Our two key partners in Ghana are the University of Cape Coast (UCC), with the SFMP, and Kwame Nkrumah University of Science and Technology (KNUST), with the ASSESS project. 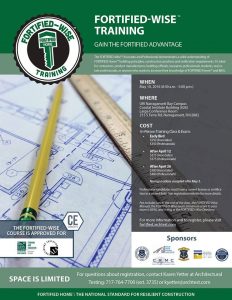 Heard about FORTIFIED homes in the Providence Journal or on RI Public Radio and how they can help your clients and communities be more resilient? You too can become FORTIFIED Wise. A training session on May 10 will provide participants with a solid understanding of the FORTIFIED Home building principles, construction practices and verification requirements. The FORTIFIED-Wise accreditation is ideal for anyone who wants to learn more about FORTIFIED Home and its sponsor, the non-profit Insurance Institute for Building and Home Safety (IBHS), whether they are new to the program or not,”including architects, engineers, builders, contractors, insurance professionals, product manufacturers, building officials, students and real estate professionals.

To register, go to fortified.archtest.com

Dr. Michael Oppenheimer, a longtime participant in the Intergovernmental Panel on Climate Change (IPCC), which won the Nobel Peace Prize in 2007, will share his insights on emerging climate science and trends at the next Beach SAMP stakeholder meeting, Tuesday, May 3, from 6 to 8 p.m. in Corless Auditorium on URI’s Narragansett Bay Campus.

He recently served as a  coordinating lead author of both the IPCC’s special report on extreme climate events and disasters (called SREX) and the Fifth Assessment Report. Dr. Oppenheimer has been a member of several panels of the National Academy of Sciences and is now a member of the National Academies’ Board on Energy and Environmental Studies. He is also a winner of the 2010 Heinz Award and a Fellow of the American Association for the Advancement of Science.

His interests include science and policy of the atmosphere, particularly climate change and its impacts. Much of his research aims to understand the potential for “dangerous” outcomes of increasing levels of greenhouse gases by exploring the effects of global warming on the ice sheets and sea level, on the risk from coastal storms and on patterns of human migration.

Pizza will be served in the auditorium library at 5:30. RSVP to beachsamp@etal.uri.edu

Hundreds of people attended Friday’s public lecture by URI President David M. Dooley at the University of Cape Coast (UCC) in Ghana and later witnessed the signing of a memorandum of understanding between CRC/URI and UCC’s Department of Fisheries and Aquatic Sciences and Centre for Coastal Management, during the president’s first trip to the West African nation.

During his talk, President Dooley said his vision upon assuming office as president of URI was to vastly increase internationalization and globalization of the school and its students because the world we live in is not just interconnected but interdependent and hyper-connected. Such hyper-connectedness includes a global economy and society in which citizens communicate in seconds and not in days or weeks. The complexity of the modern world includes great challenges, such as climate change, which is beyond one single nation’s ability to solve alone, he continued.

“With these global challenges also come global opportunities. We need to focus more on the opportunities,” he told the audience.

He continued: The less-developed world is not responsible for the lion’s share of atmospheric changes, but it and the entire world have to live with the consequence. That is not the only challenge with global consequences: War in one country affects the entire world; the outbreak of diseases, quality of the air we breathe, sustainability of the food supply, disputes and conflicts are all global issues, he said.

“We are no longer insulated by borders and oceans as we once were, but in all this, are global opportunities and demand for higher education,” President Dooley said.

During the memorandum of understanding signing ceremony, President Dooley received a gift of rich local Ghanaian kente cloth and sandals. The entire URI delegation received souvenirs from UCC as a symbol of friendship.

President Dooley continued his inaugural trip to Ghana Saturday when he met with four doctoral and two master’s students bound for URI on a USAID-funded scholarship program. The graduate students went through an intensive and competitive selection process to emerge as recipients of the scholarships. President Dooley congratulated and welcomed the students in advance to URI and hoped they make the most of the experience.

On Friday, April, 15, he met with University of Cape Coast (UCC) Vice-Chancellor Professor D.D. Kuupole. President Dooley said he sees his visit as an opportunity to strengthen collaboration and friendship with the wider university community. Prof. Kuupole says UCC treasures the collaboration, which has helped draw the university’s Department of Fisheries and Aquatic Sciences into the limelight.