CRC and partners led climate change workshops in Tanzania and West Africa in 2013 that took a fresh, national–or regional–approach to addressing climate change at the development planning stage. This work and the lessons learned from it are included in the article “A Perspective on Climate-Resilient Development and National Adaptation Planning Based on USAID’s Experience” recently published in the peer-reviewed journal “Climate and Development.” 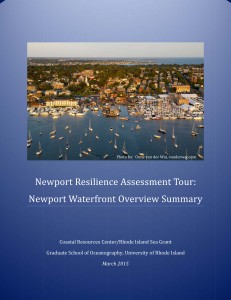 CRC has recently published a report providing an overview summary of the Newport Resilience Assessment Tour (NRAT), which CRC led in the summer of 2014 along with its partners at R.I. Sea Grant and R.I. CRMC.

NRAT was conducted as a climate change adaptation effort concentrating on Newport, RI, waterfront and a conducted through the participation of several businesses and organizations interested in receiving recommendations for protecting their property and assets from storm damage and sea level rise.

The assessment tour and report were completed as part of the R.I. Shoreline Change Management Plan (Beach SAMP).

A CRC-led study tour for a group of Vietnamese leaders in October 2014 is the subject of a New Orleans Public Radio program. The tour, led by CRC’s Glenn Ricci with administrative and logistical support from Cathy Dwyer, took officials from the Vietnamese government to the New York City metropolitan area and New Orleans to learn how to better adapt to sea level rise and climate change. The radio program is part of a New Orleans Public Radio mini-series, “Delta Blues: Water and Climate Change from the Mississippi to the Mekong,” which examines shared flooding and saltwater intrusion issues facing two great river deltas, the Mississippi and the Mekong, and the conversation developing between them to address those challenges.about the delta region and climate change.

Next week CRC will lead a study tour to New York, New Jersey and New Orleans for Vietnamese officials as part of the United States Agency for International Development (USAID) Vietnam Forests and Deltas Program. The program aims to help Vietnam put into practice policies and strategies regarding climate change and low emissions development in conjunction with Vietnam’s Ministry of Agriculture and Rural Development and provincial governments. The study tour (Oct. 21-29) will provide opportunities for Vietnamese officials and leaders to consider broader adaptation strategies for rivers and deltas, such as alternatives to traditional defensive barriers that include dykes or seawalls. Additionally, the tour will allow consideration of plans for what may inevitably be resettlement in certain coastal areas. The group will visit government, business, academia and community leaders working in the New York/New Jersey region as well as the New Orleans region of the Mississippi Delta. These locations are large urban centers with significant waterfront infrastructure, industry and active communities engaged in developing strategies to address climate change and resiliency challenges.

The accomplishments of CRC’s sustainable livelihoods activities in Tanzania are featured in a success story on the United States Agency for International Development’s (USAID) website. The livelihoods initiative was one component of the five-year Pwani project, which focused on coastal villages near Saadani National Park and Zanzibar’s Menai Bay Conservation Area and concluded in December.